After settling on my brief I have constructed a shoot schedule.

After my initial research I narrowed down a list of locations I plan to visit during my reccie. I created a google maps marking all the places I might photograph during my final shoot, the reccie’s will help determine which choices to narrow down.

As I have many options spread across London I will separate my reccie into three separate dates, two during the day and one during the night. I scheduled my reccie shots by date, time and location:

“The Glass Bar is London’s sole women-only bar. Having started out life as a travel guide and bookshop it is now a warm, friendly and welcoming bar for all types of women. The purpose of The Glass Bar is to support and encourage the artistic expression and cultural development of the London women’s community.” –  Lost Womyn Space

Founded in 1995, The Glass Bar was a space for queer women to socialise, drink and network, it closed it’s doors in 2008.

London’s only gay bookshop, serving as both a resource and community for LGBTQ people. The book store was once raided in 1984 under the Obscene Publications Act and thousands of pounds worth of stock was seized.

Not much remains online about this location, a bar for ‘girls who like girls’, now shutdown and repurposed

“I cried a little bit,” says Neus, originally from Barcelona, now behind the bar at Candy. Like a lot of London queer girls, she is sad to hear that, at the beginning of next year, the capital’s most famous lesbian bar will shut its doors for ever.” –Guardian

From 1996 – 2011 Candy Bar was one of London’s favoured venues for gay women, it prided itself for offering a space for women to express their sexuality comfortably. During the height of its popularity the streets surrounding the bar were full of queer women relishing in the community and life it brought to Soho.

I have created a production schedule to outline reccie and shoot dates in order to have the brief completed to the deadline. The schedule allows for time if weather conditions are poor and the shoot needed to be moved to another day. It also has the final shoot done in sufficient time before the deadline to avoid missing any important shots in order to fulfil the brief content 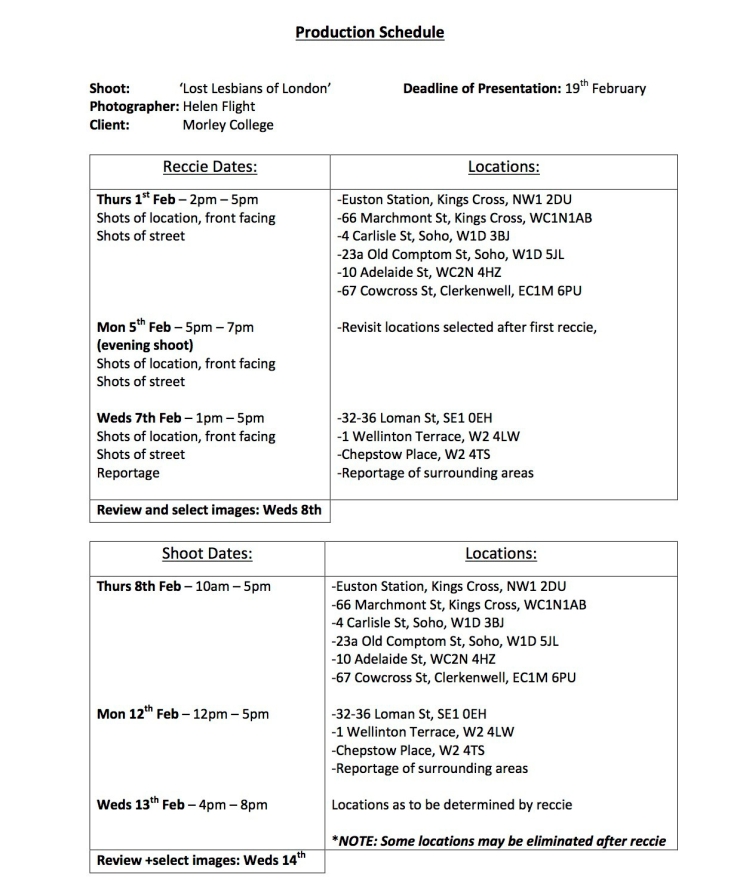 I have set myself a budget of £100 for the whole project, an estimate of how much I will spend on travel to complete the shoots. If I had a larger budget I would include photographers fees, assistant fees and money to hire out additional equipment. Below I have included a mock up of a budget sheet for the shoot, the photographers and assistant fees have been wavered due to the nature of this shoot. 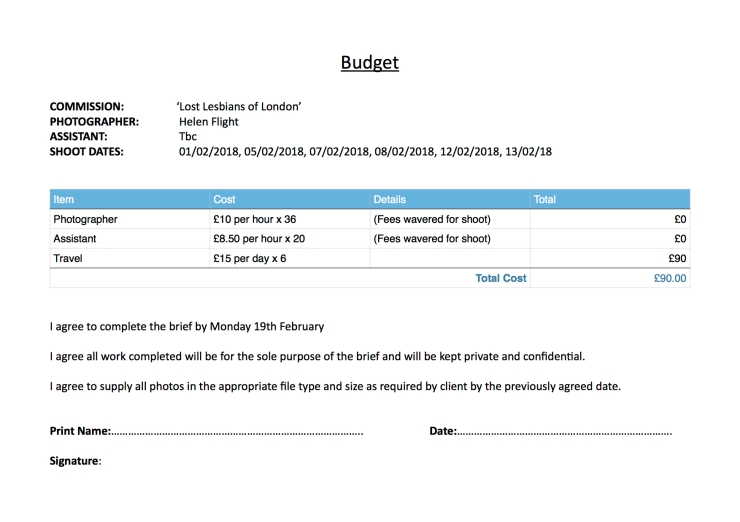 As with any commissioned photography brief, it is important to carry out a risk assessment before beginning the shoot, implementing an important health and safety management plan. Hazards are anything that might cause harm, risks are what might occur and how likely or unlikely they are. A plan to control risk minimises accidents happening and creates a safer work environment.

With everything scheduled and legal documents finalised, I am ready to begin shooting.