I believe my #mood shot was successful, and I was happy with the outcome of my photos and believe I worked successful to my brief and schedule

I have an interest in women’s mental health and living in the digital age and age of social media and constant access to information. It has been a constant theme that I have explored throughout the duration of my course. Originally, I knew I wanted to explore mood disorders and planned to shadow a subject and take observational photos, however I felt within the time constraints there was possibility that this would be unsuccessful. I realised the extent of this project was pretty huge so I wanted to narrow down the subject matter and have a specific POV for my final images. I tweaked the the brief slightly to focus on living with a mood disorder in the digital age. This helped me hone down my research and really think about the creative direction I could go with this project.

Living with a mental illness in the digital age creates complex relationship between person and the way they interact with social medias and smart phones. There is a growing trend of people using social media platforms to document their struggles with mental illness, and this is particularly the case among women. I wanted to portray this complex relationship within my photos, and believe that I have done so.

Before shooting I discussed with my subject about our shared struggles existing with mental illness both in everyday life and sharing our experiences online. She was open and comfortable with being photographed but I gave her permission to stop me shooting at any time. I kept communication open with her throughout the shoot, to make sure she felt comfortable and safe. After we shot the photos, we reviewed them together and discussed how she felt. I made note of some of the things she said, and have used parts of our conversation as quotes to accompany the photos.

I shot at my subject’s home, as I wanted them to be comfortable and allow themselves to be vulnerable. This is best done in a domestic setting, as they feel more at ease to express themselves. I also wanted to portray a sense of how much the digital world, encroaches into our personal lives in almost every aspect. To do this I had the phone in shot where possible and used lighting to emulate synthetic and unnatural colours, even using the phone as a light source as planned. This was an important decision as I think it worked well in contrast to the domestic setting, it transforms the space. I often wanted my subject to be illuminated by the coloured lighting to enhance the face that she exists in two spaces at once – in the present and digitally.

This was one of my favourite shots from the series, I believe it captures exactly what I was trying to achieve in my brief. I used the red light as backlighting to create a silhouette and slight halo effect with the light emitting from behind her. The phone light is project a soft light slightly from below, highlighting the expression on her face and creating that unnatural blueish tone. I placed my own phone in the image lit up with a

red screen as I thought it complimented the red of the back light. The low lighting only vaguely lights the scene, the most important details are her on her phone seemingly engrossed. I shot at 42mm wanting a tight frame of her and not too much of the background, framing the important details in the shot. To improve looking at this image with new eyes, I would definitely crop out that distracting shelf toward the top of the image.

I liked these two images as a set, I took them shortly after we spoke about our own struggles with mood disorders. I believe they are slightly disconnected from the other images in terms of how they look stylistically but thought important to include in the narrative of this work. I want to convey an honest depiction and this moment felt very raw and real and highlights just how hard it can be when talking about and dealing with these very complex issues. I was working on a shutter speed of a about 1/2 which explains the softness and blurriness, I liked this however, believing it gives a sense of life and emotion to the images. They’re imperfect. To improve them I would probably like them to have been as contrasty as the rest of the images I have created, but it was a spur of the moment shot.

During my observations of my subject’s regular routine she often smokes and browses her phone to wind down from work. I was struck how much often she used her phone to wind down and relax, she said she was posting about how she was feeling and I knew I wanted to capture this on camera. I was watching her from the inside as she stood against the door and the light from the outside contrasted against the light that was pouring from her face. I wanted to capture this moment but from an outsider’s perspective thinking it would look quite striking and in ended up being so. Again I have used a soft back light, this time blue and her face has been lit with the phone screen from underneath with a red tone. I took one closer shot and a wider shot to also include more of the location’s details; I particularly the combination of the 3 colours. Everything feels surreal and not quite usual, quite moody and dark.

I took this photo with similar intentions as the previous two. We changed locations but the lighting scheme remains the same, with red, yellow and blue. Working with ambient lighting was tricking, I had to shoot at low shutter speeds. I like the framing of this shot, lots of lines and angles and she sits to the left of the image, slightly blurred and lit by red. I liked the motion again, implied by the slight blurring. 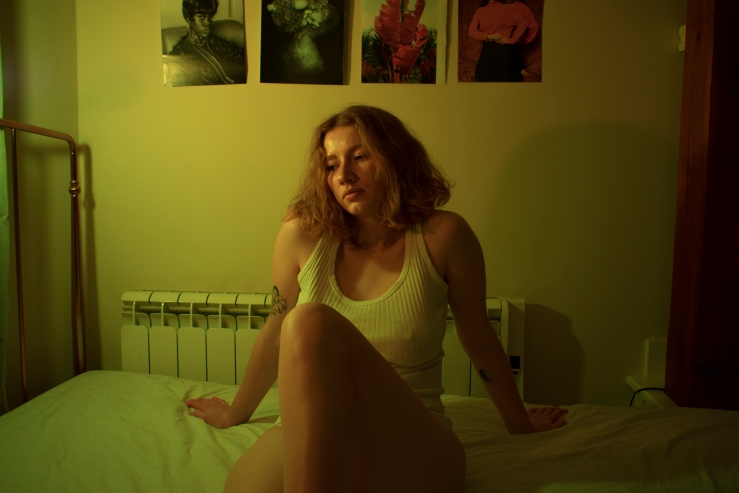 For these final two images my subject is in bed, in one of her most vulnerable states and yet the phone is still there, still visible, still present in her life. By this time of night she was feeling extremely tired and low. I photographed with sensitivity here, not wanting to intrude and not wanting to exploit her vulnerability. I asked if it was okay to shoot a portrait and she said okay, and she then rolled over and had a moment to herself. I felt the two together worked extremely well. For the second image I shot slightly wider to capture the entire length of her body and the bed she was it – as I felt the location here was fairly important and making sure to get the phone in shot and create a suggestion of this need to be connected creeping in.
In the sequence the lighting sits in contrast with the other images but I felt they were so strong and adhering to the brief I wanted to include them in the final set.

Overall I was happy with the photos I produced, I worked to fulfil the brief to the best of my ability, keeping in mind technical aspects to create good shots. I feel like I have begun to capture a complex issue and have throughly enjoyed the process of creating these shots. My only criticism is that some of the images work best as pairs or groups but the eight images as a whole don’t flow as well as I would want them two. This is partly due to colour scheme with the lighting. This is certainly something I will focus on developing in future projects, especially within this theme.
I felt the location worked well and was pleased with the outcome of how the locations looked with the lighting choices I made. I think it transforms the images into something much more graphic and surreal.